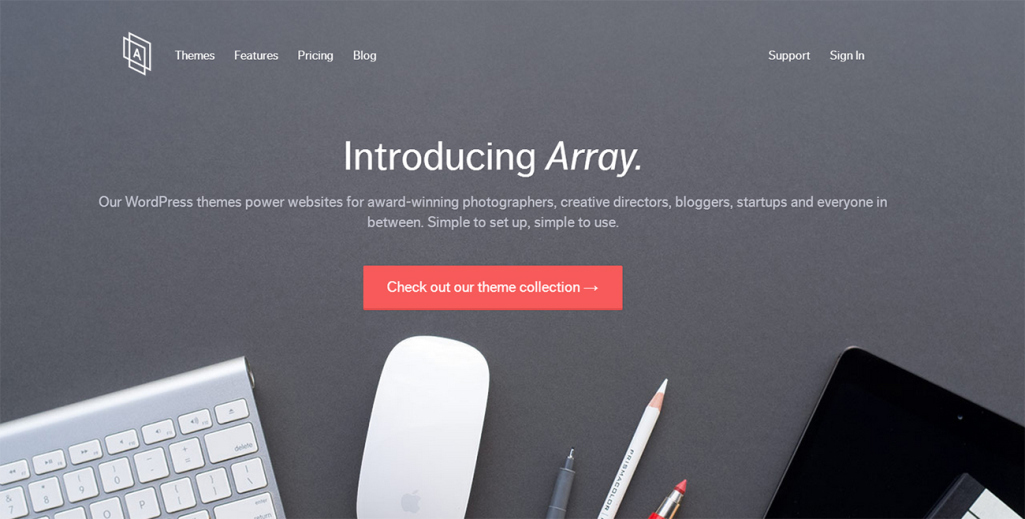 The Array theme shop, founded by Mike McAlister, is celebrating one year since becoming a completely independent operation. Array, formerly known as Okay Themes, pulled out of Envato’s marketplace last April to rebrand and relaunch with the freedom to further build the business.

At that time, McAlister said, “After fighting the good fight for five years, my body of work has officially outgrown the ThemeForest marketplace. Although it has been a great platform for starting my business, my own ethos and aspirations have evolved.”

In a surprise about-face, Array is returning to Themeforest with a selection of themes and selling as a non-exclusive author. McAlister considers this an expansion of their independent shop, which has experimented with a number of different distribution channels.

“The thing is, Themeforest dominates when it comes to market share,” he said in a recent post explaining the change. “With all of the various avenues we tried, none came close to the reach or revenue that Themeforest has provided in years past.”

McAlister replied to a thread on WP Chat to clarify that the decision was not motivated by a lack of sales or desire to cut back on Array. Rather, they see Themeforest as an opportunity to increase exposure to the brand, despite the fact that Array will now make just $19 per theme sale on the marketplace while still attempting to provide quality support.

“We’ve definitely been selling more themes at the $49 price point in the short term, but we’re still quantifying that data to see if it’s where we want to be ultimately,” McAlister said.

Drawbacks of Selling with WordPress.com and Creative Market

Even more interesting than Array’s move back to Themeforest are the insights McAlister shared about selling via other marketplaces. After exploring multiple avenues of distribution during the past year, he found the most significant drawbacks came with Creative Market and WordPress.com.

“The first few months of our time on Creative Market, we’ve only seen ~20 sales per month,” he said. “Although there is a ton of activity for other kinds of digital goods, the WordPress category simply doesn’t seem to be thriving.”

Array’s experience with WordPress.com was similarly disappointing, due to the company’s recent promotion of free themes in the past several months and lengthy wait times in the approval queue.

“The review process on WordPress.com is long,” McAlister said. “I’m not talking about weeks long, I’m talking about months long. Each Array theme review has taken at least a month, usually longer. Our latest theme for WP.com, Camera, took four months from the day I submitted it to the day it was released.”

While his experience may not represent that of all theme authors on WordPress.com, the structure of the selling process makes it difficult for authors to build a reliable source of income.

“At any rate, as you can imagine, releasing products this far apart makes it difficult to gain momentum, predict sales figures, and establish a reliable stream of income,” he said. “On top of that, because theme sales aren’t calculated until after the refund window has passed (understandably), it can be several months until you see return on a theme.”

McAlister’s disappointing experiences with Creative Market and WordPress.com contributed to his decision to move back to Themeforest. Although Array is currently bringing in double the monthly revenue it was making on Themeforest previously, the shop still relies on outside distribution channels.

“It would be super great if Array was suddenly wildly successful and we could just sell themes solely through the site and not rely on marketplaces, but that’s not the reality of the commercial theme world right now,” McAlister said in response to comments on his announcement.

No marketplace is perfect and each has its own unique drawbacks, but Array’s experiences this past year re-established Themeforest as the clear winner for the shop’s current needs.

Furthermore, as poignantly stated by Philip Moore recently, there exists no better or more accessible platform for developers to distribute commercial WordPress themes right now. WordPress.com isn’t accepting new partners, Creative Market doesn’t have a sustainable market for themes, and starting a new theme shop without an established following would be nothing more than an exercise in futility.

McAlister hopes that Array can have a positive impact on the Themeforest marketplace, instead of remaining among those that criticize from the sidelines.

“Given that we spend a great deal of time crafting themes to high standards, in both form and function, we want to help further promote the idea of design-driven, feature-conscious themes, without sacrificing quality or selling your soul to the devil,” he said.

“We want to show people that you can, in fact, make a living creating honest products.”

HHVM Demonstrated to be 18.7% Faster Than PHP 7 on a WordPress Workload

StackExchange is Testing a Proposed Q&A Site for WooCommerce